Hugely enjoyed watching the Narnia Code last night on BBC1. Not only was it great to see Spud (Michael Ward) on TV in

something other than a Bond Movie, but more importantly fantastic to have a programme on TV that was so unapologetically God-glorifying.
As well as the thesis of Planet Narnia being fascinating and compelling (that Lewis structured the plots of the seven Narnia books and the depiction of Aslan within those books around the characteristics of the seven planets of medieval cosmology) but more importantly it opened up a very useful line of dialogue with the New Atheism.
Whereas Atheism starts its understanding of the world from the "basic building blocks" of matter, energy and time, and then somehow asks how on earth these things randomly generated something as extraordinary as consciousness, Lewis starts at the other end. The fundamental thing is consciousness (cogito ergo sum). 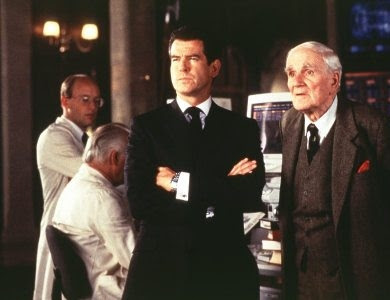 Everything else must be explained in terms of its relation to consciousness.

I consider this a far more fruitful line of conversation than the (still useful and compelling) intelligent design arguments, that seem to give away the premise that we must start with the same toolbox as the atheistic materialists.
Posted by Mike Gilbart-Smith at 4:22 AM

Hope you are well

I'm interested in discussing some of the concepts in Jesus' first sermon and examining parallels with present day. Is there a way I can get in touch with you?

Hi Melvin,
Good to hear from you.
You can email me at mike at twynholm dot org, or the phone number is on the church website, www.twynholm.org
Let's grab lunch... are you in London?

I'm not a religious person, but nor would I describe myself as an atheist because the Richard Dawkins' types seem to hate anyone who disagrees with them and anti-free speech. I watched the Narnia show with interest. I don't agree that CS Lewis proved an existance of a god, but it was an interesting conecpt. Also, for balance it was good to see reasonable and intelligent religious people's views expressed on the BBC for once, instead of those of religious extremists and smug atheists.

Mike Gilbart-Smith
I'm a sinner saved by grace who has the tremendous privilege of being called to serve the Lord's church full time as Pastor of Twynholm Baptist Church, Fulham. Married to Hannah, the world's most lovely woman. Honoured to be father to six fantastic kids ranging from 3 to 17